I started training with Craig March 2018, in preparation for my competitions in July and August.

Prior to Craig I had been training with a few other coaches who had me doing a minimum of 2, sometimes 3 hours of cardio per day. After these preps, I was physically and mentally burned out. I took 2 years off of lifting (for various reasons, aside from being burned out).

When I adopted my daughter a little over a year ago, I thought I may never be able to compete again…unless there was another approach. Craig’s approach made being a mother and a Figure athlete doable! When I lifted, I lifted hard and for about an hour. Cardio was at MOST 4 times a week for 20 minutes!! My husband even mentioned one day “I barely even notice you are prepping!” (which was a great compliment after our previous experiences.)

I also call Craig the “Macro Master.” No other coach, despite the long hours of cardio, could ever get me lower than 118 for a show, but Craig had me all the way down to 104 on show day, and leaner than ever! By following his macros, the weight literally fell off. I was floored when I would step on the scale and the numbers would just keep dropping. It literally seemed like magic.

Craig came to both of my shows and he and Crystal tweaked my posing, made sure my tan and gloss were ok, and cheered me on while I was on stage. I had never had a coach at my shows before…it was very evident that they really cared and wanted me to do my best. It was with them by my side that I earned my OCB Pro Figure title!

The final thing I want to say about Craig is that he is ALWAYS there. I contacted Craig EVERY DAY during prep with questions, concerns, etc. He would always get back to me in seconds. He was very patient and worked with me, even on the few occasions I fell off my plan… he would simply adjust my numbers and get me right back on track! The team is also VERY supportive. The team page is positive and uplifting and everyone cheers for one another. Craig has created a great online environment for us to gather together, talk, inspire, and inform one another.

Thanks to Craig and the wonderful prep I had with him, I am now more on fire for this sport than ever! Heading into my off season, I am not burned out at all, but excited for the future to come! I will use the tools he has taught me to make the most out of my off season, so that next prep I come back better than ever! 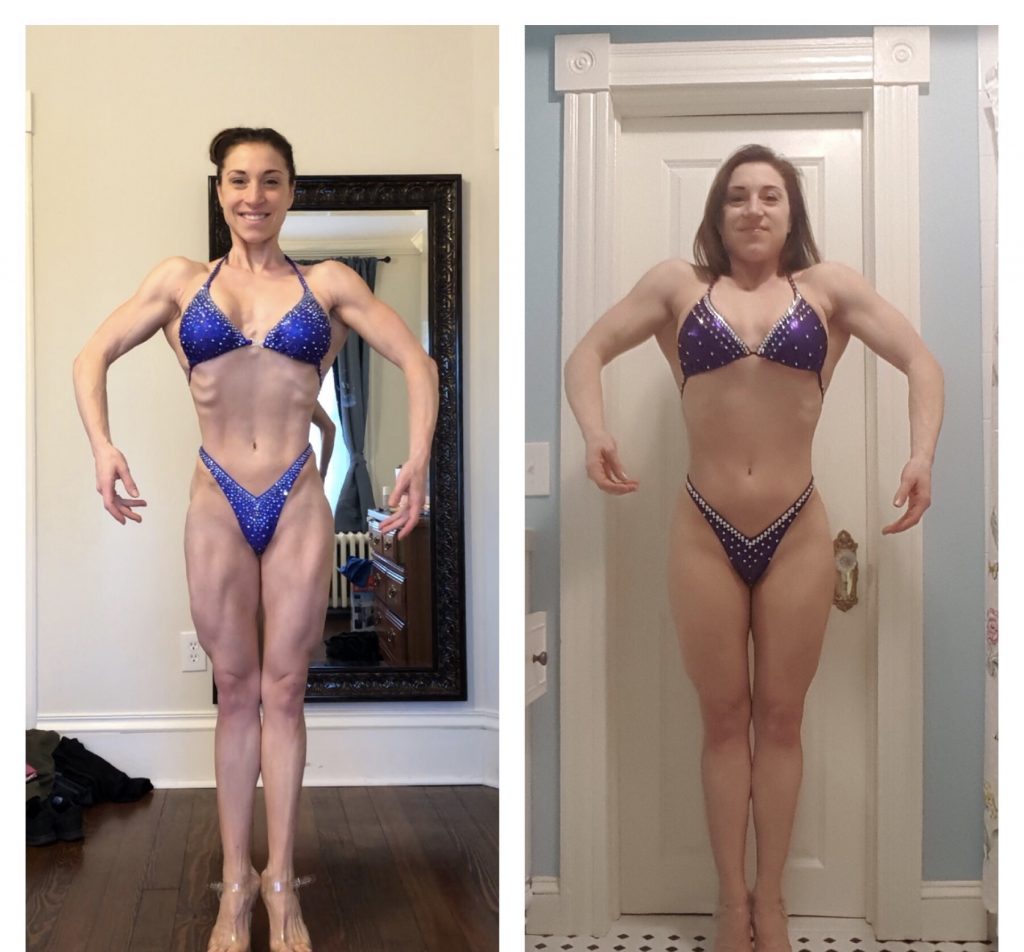 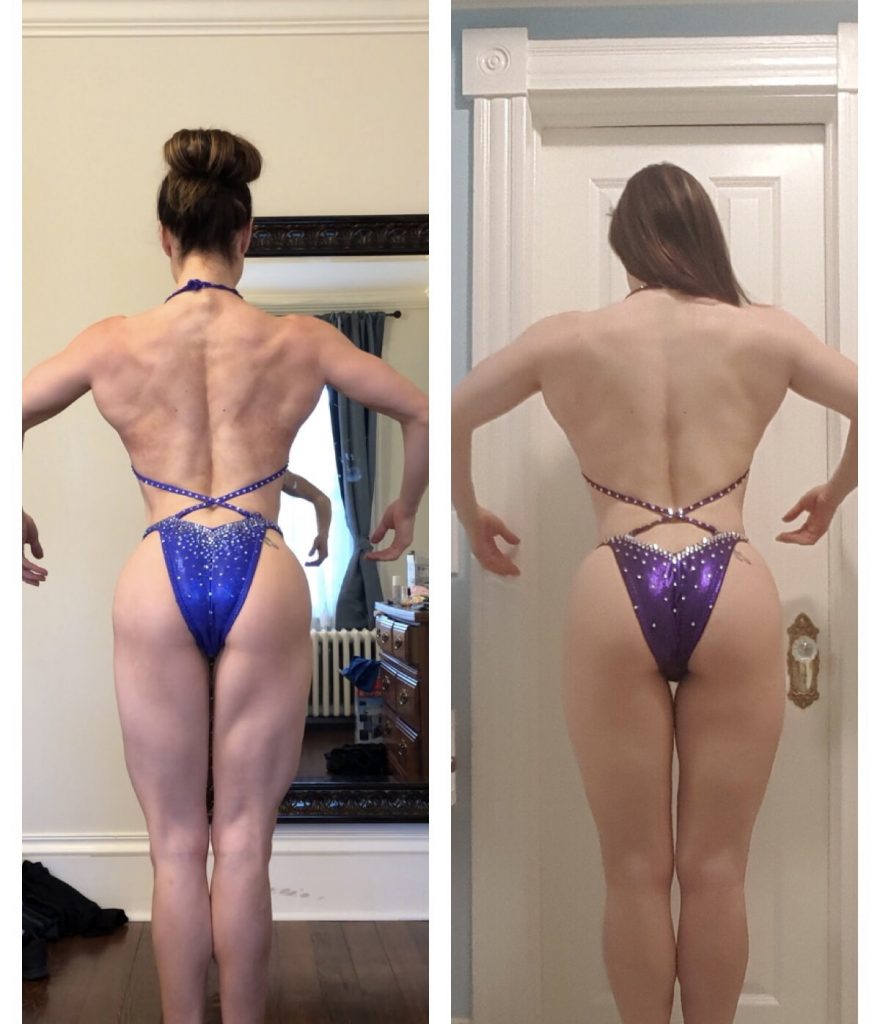 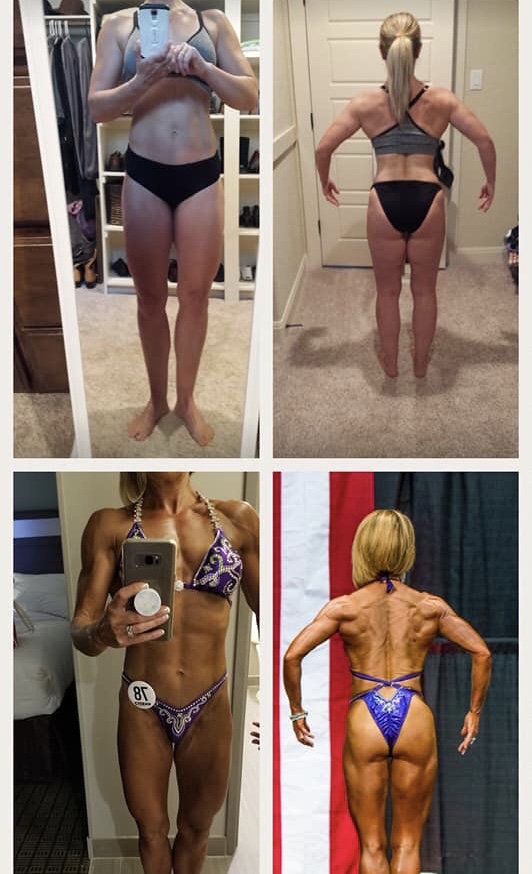 Its high time to give a big British 🇬🇧 shout out to one of the best coaches in the business, Craig Yarnell. I’m proud and grateful to say that he is my coach and the person to whom I attribute the many good things that have happened to me over the past 18 months in the world of competitive bodybuilding.

I’ve been strength training and competing in Figure for quite a few years. I’m a dietitian with a Masters in nutrition, and am a newly certified personal trainer. I’m also a nutrition coach to a growing community of regular people wanting to live healthier lives, as well as over a dozen athletes. With all this experience under my belt you’re probably wondering why I don’t prep myself for competition. Truth is, even coaches need coaches to provide fresh insight, objectivity, accountability, and a swift kick up the arse occasionally. Craig provides me with all of these things, and more, on a daily basis.

There are many things about Craig that set him apart from other coaches. Firstly, he never stops learning and growing his skills. His science based approach to everything involving strength training and nutrition is one of the reasons he’s numero uno in my eyes. Secondly, he really cares about his clients and works incredibly hard for us all. If I message him with a question he’s back with an immediate answer, unless he’s with another client or trying to catch a much needed nap. Thirdly, he’s not afraid to tell me the truth. Blunt and to the point, he always let’s me know where I stand. He holds me accountable and keeps me grounded.

The combination of the above, plus years of knowledge and expertise and truly walking the walk has made a huge impact on my life. My training and nutrition are more on point and structured than ever. Craig has instilled in me a desire to excel, and to give 100% towards achieving my goals. I’ve wanted to make him proud for so long and winning my GBO Elite Pro title 2 weeks ago was the perfect way to show Craig how much I appreciate him as a coach and as my friend. Not to mention, I made his “arse wall of fame” – lol, they dont call him Butt Man for nothing! Who knew this old booty had the ability to transform to new levels in the way it has? Craig Yarnell did.

So I’m transitioning into off season and, with the help of my fantastic coach and teammates at Team Synergy and Science, I shall be BRINGING it to the pro stage in 2019!! Thank you Craig.

I first met Craig and Crystal in September of 2013 at ANBF show.  Crystal and I were both competing.  We also both wrote for different fitness magazines at the time and so through the magic of social media I knew of her and was happy to meet her and chat with her and Craig in person.  It is always great to connect with positive and driven individuals with whom you share a passion with.

Shortly after that show, Craig unexpectedly reached out to me offering to help me prepare for my first World Finals, which was in 6 weeks. This was new to me.  I had always done all of my training programs and nutrition plans on my own.  But, competing as a pro in a World Finals was also about to be very new to me and with that I accepted the help.

Since that time I have come to rely on Craig for nutrition, training advice, and posing tips so that I am continually at my best each time I step on stage.  There is unparalleled value in having a coach.  However, that value lies in the quality and genuine expertise of that coach.  I have trained and followed my own passion for fitness by learning all I can, reading and researching everything I can and applying it to my own practice and work ethic, for roughly 30 years.  I still do not consider myself an expert or pretend to know it all.  In Craig, I have a coach, yes, but Craig’s own knowledge, long list of certifications and degrees, and the fact he is continually enrolled in the latest courses, and science based programs make invaluable and exactly who I want and need if I am to pursue goals much larger than myself.

Craig and Crystal have a passion, knowledge and perspective of health and the sport of fitness and bodybuilding that few can match.  Together they have an unstoppable work ethic and will consistently go all out for their clients.  I couldn’t ask for anything more in both of these individuals. 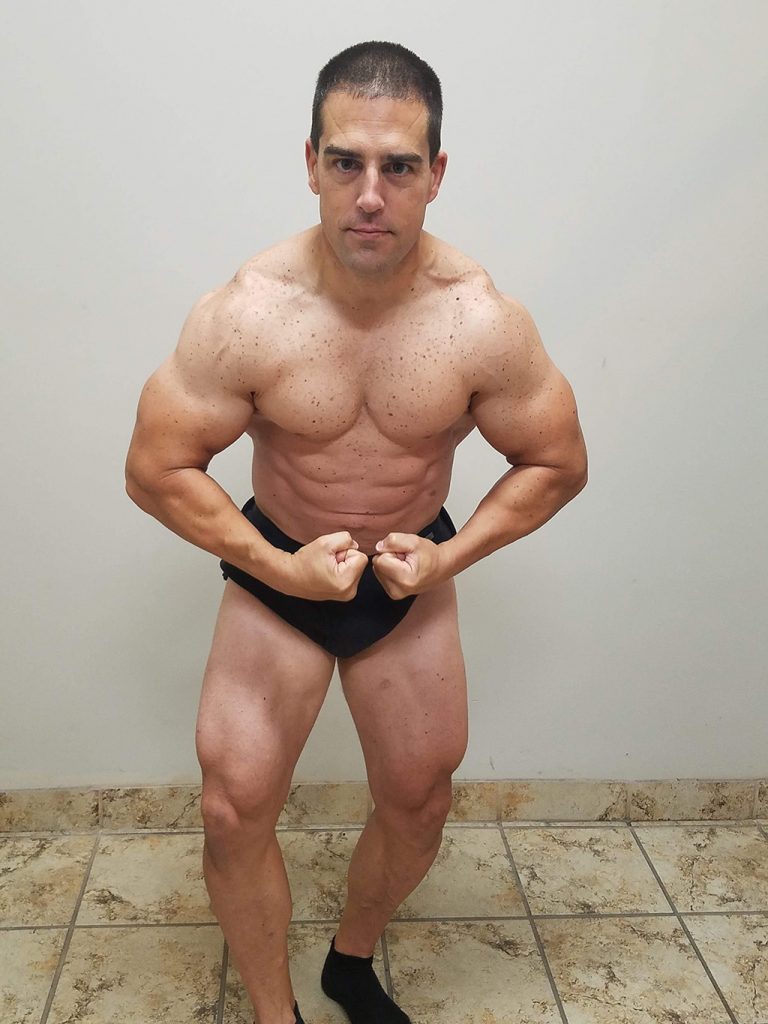 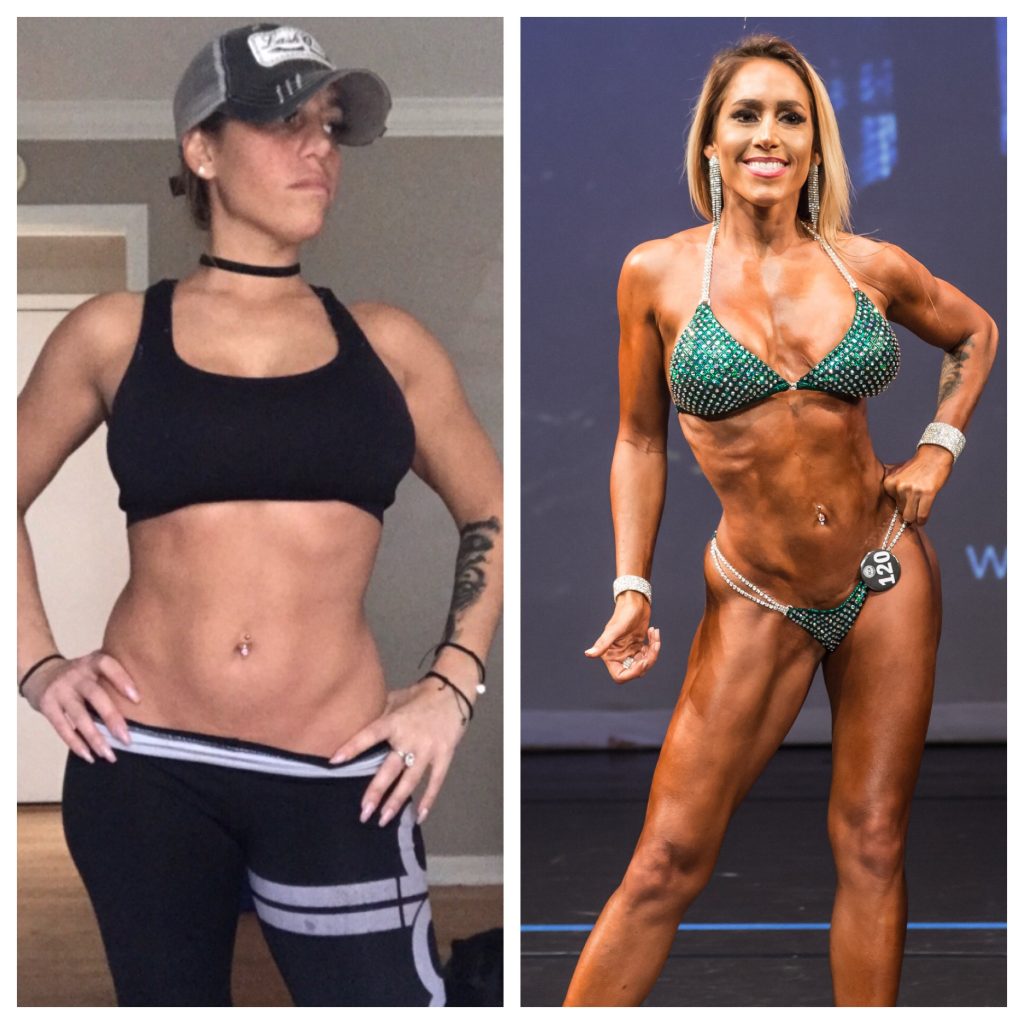 I met Craig Yarnall and Crystal Woods 4 or 5 years ago at my sons wrestling match. I have always wanted to compete but never knew how to go about it ..meeting them was fate, i knew that when I was ready to give this 10000% I was going to them. Finally 4 or so years later I still had Craig’s contact in my phone as well as Facebook page and I contacted him letting him kno I was finally ready to give this my all. I started with a personal training session with him back in January of this year in which I almost passed out while trying to do assisted pull-ups (not even lying we had to stop and he had to get me water lol I almost went down for the count ). He laughed , I laughed  even tho I was so mad at myself for allowing myself to get in such poor shape . Anyway , from there on out craig performed his magic macros for me with the goal in mind to do a show in September. I followed them to a tee , measured and weighed all my food and did my work outs and  whatever else it is he said to do. ANY question I had ( no matter how stupid ) was ALWAYS answered right away…poor guy would get texts all day long some days, asking him about food advice or workouts …never once did he make me feel like I was bothering him (unless it was at his 2pm nap hour ) hahaha jk ..fast forward to July there was a august show (the big apple ocb show) and I asked him if he thought I would be ready for it . Him and Crystal both decided they think I would be. So we really focused on this goal … he knew how much this meant to me and I could see how much I meant to him as a client. One of my favorite things about craig and crystal is how PASSIONATE they are about their clients , and personally, how passionate they were towards me ..my goals became their goals. They made me feel like they wanted this just as bad as I did and I don’t think you can really ask for more in a coach. Seeing craig and crystal after I won my show, I could see how much that meant to them bc they knew how much it meant to me …never will I ever be able express how grateful and how much I appreciate them. I can’t wait to continue this journey with them and see how far we can go together …thank you guys so much for everything I couldn’t ask for better